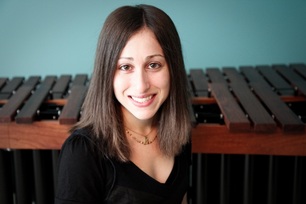 ﻿﻿Abby Fisher is a versatile percussionist, residing in New York City. She is very interested in performing and supporting continued growth of new music.

In Spring 2013, Abby won the New York University Steinhardt Concerto Competition and performed Andrzej Panufnik's Concertino for Timpani, Percussion, and Strings with the NYU Symphony Orchestra. Other recent performances include performing with the NYU Contemporary Ensemble at the 2013 Bang on a Can NYC Marathon, with the NYU Percussion Ensemble and NYU actors in a performance of Sam Shepard’s Tongues at the 2013 Percussive Arts Society International Convention (Indianapolis, IN), and in the production of The Secret Paris Project at the Secret Theatre (NYC) where she created and performed the score. In 2013, Abby co-led a consortium of percussionists from all over the US and Canada in commissioning a vibraphone and speaking -voice work titled ‘All Your Thens For Now’ from composer Lawton Hall.

In May 2014, Abby graduated from NYU Steinhardt with a Masters of Music degree in Percussion Studies where she studied with Jonathan Haas, James Saporito, and Simon Boyar. In Fall 2014, she will begin her Doctorate in Musical Arts in Percussion Performance at Stony Brook University and study with Eduardo Leandro. In 2011, Abby graduated with honors from Lawrence University with a Bachelor of Music degree in percussion performance, where she studied with Dane Richeson. She was consecutively awarded the Lawrence University’s Conservatory Trustee Scholarship from 2007 through 2011.

Abby is also an enthusiastic teacher with experience teaching both private lessons and larger ensembles. She taught at the Lawrence Academy of Music (Appleton, WI), and at University of Toronto through her position as the Wind Symphony teaching assistant.

Abby has been fortunate to study and perform with Beverley Johnston, Michael Spiro, Nani Agbeli, John Rudolph, Julie Spencer, Michael Burritt, Joe Ludwig, Jamie Ryan, and Janet Cramer. In the summer of 2010, Abby continued her study of Ewe drumming and dancing at the Dagbe Cultural Center in Kopeyia, Ghana. Also, she studied Bata drumming with Afro Cuban master Michael Spiro in San Francisco during the summer of 2011.﻿﻿